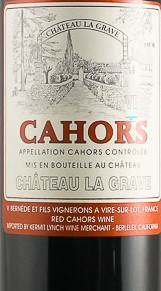 Southwest France
Share Tweet
Deep in the southwest of France, amidst dramatic rock formations and cliffs, the Lot River slowly snakes its way along the valley floor, coiling covetously around the charming town of Cahors. The diversity in architecture serves as a proud historical mark left by many previous generations of inhabitants. Once a former Roman town, Cahors was also as a center of commerce during the Middle Ages that served as an important crossroads for pilgrims on the trail to Santiago de Compostella. Among the many specialties that have brought pride to the region, the constant has been its wine. A.O.C. Cahors is known as the “black wine” of the Southwest—the deeply inky, earthy wines that seem to complement the regional fare of duck (and duck fat!) so wonderfully. Cahors is also the birthplace of Cot, the grape more commonly known as Malbec.
Must be ordered.
Buy this one by the case for $13.50 per bottle